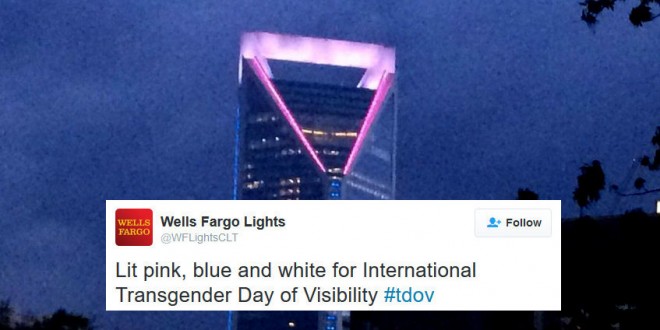 Yesterday was the International Day of Transgender Visibility and in support Wells Fargo lit its 48-story Duke Energy Center tower in Charlotte in pink, white, and blue, which are the colors of the transgender pride flag. Also yesterday Wells Fargo joined the 80+ major corporations who have called for the repeal of North Carolina’s hate law. From the Charlotte Observer:

“As a reflection of our company’s vision and values, Wells Fargo has a long history of support against discrimination of any kind and for LGBT rights overall. This is fundamental to who we are as a company and what we stand for in terms of equality and basic human rights,” the company said in a statement. The statement also says Wells Fargo “opposes laws that would allow people or businesses to discriminate against lesbian, gay, bisexual and transgender community members or individuals.”