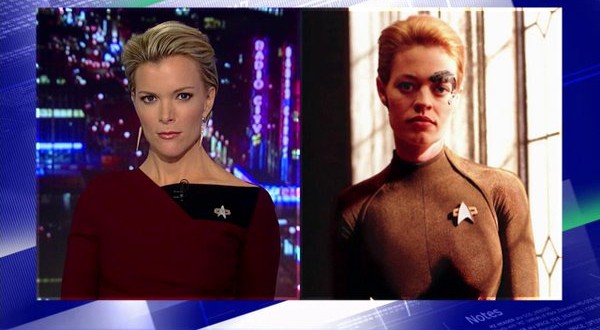 Megyn Kelly’s new hairstyle has prompted a minor Twitter meme comparing her look to the Star Trek: Voyager character Seven Of Nine, who was a former member of the Borg. Last night Kelly acknowledged the meme by appearing at the end of her Fox News show in a Starfleet uniform. Jokes about Fox News and the Borg are just too easy, aren’t they? Hardcore Trekkies will know that the character’s full Borg name was Seven of Nine, Tertiary Adjunct of Unimatrix Zero-One.

The guys on the #KellyFile crew are big fans of Star Trek (and apparently of Seven of Nine)! pic.twitter.com/n3x106x0hl