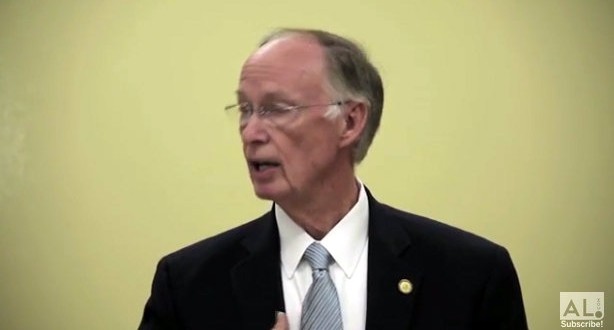 Gov. Robert Bentley made perhaps his most heartfelt apology yet on Monday, repeatedly asking the people of Alabama for forgiveness for the scandal that has engulfed his administration. Bentley also said he had asked forgiveness from God.

“But I asked other people to again forgive me and I’ve already done that and I have truly asked the people of this state – they’re the folks who love me and are the best people in the world – I have asked them to forgive me.”

During a press conference at the north Alabama prison, Bentley spent about 2½ minutes speaking on the scandal that has led to the resignation of his senior political adviser, Rebekah Caldwell Mason, and for some lawmakers to consider impeachment proceedings.

Last year Bentley filed a SCOTUS brief in which he proclaimed that same-sex marriage is “demeaning to democracy.” Shortly thereafter his wife of 50 years filed for divorce. Court records show that the now-former Mrs. Bentley declared that her marriage had been “irretrievably broken” by her husband’s affair with the above-named and 30-years-younger assistant.