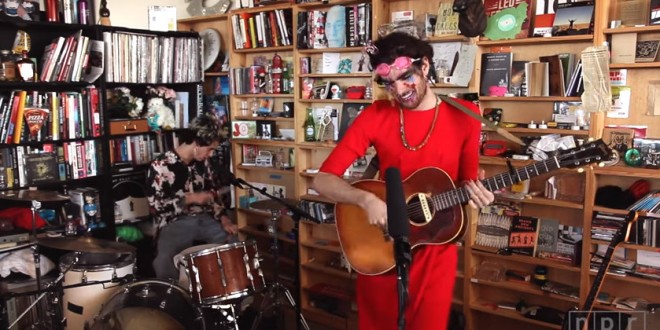 Yesterday PWR BTTM, who I first mentioned here back in September, performed for NPR’s Tiny Desk concert series. I like these guys. Clip recap:

It took only a few power chords, a sprinkle of glitter and the occasional jokey line — “We can do our makeup in the parking lot / We can get so famous that I might get shot / But right now I’m in the shower” — to forever hook me on PWR BTTM. The queer, glammy, wildly dressed duo has a keen sense of mischief and a real gift for honest, punk-infused, tongue-in-cheek pop gems.

Ben Hopkins (in red, fingernails included) and Liv Bruce swap roles as singers, guitarists, drummers and storytellers, each trying to playfully one-up the other. It’s a show that might have worn thin if the songs (from last year’s Ugly Cherries) weren’t so much damn fun. Instead, they’re likely to stay with you as long as the glitter has stayed in my clothes and carpet fibers.