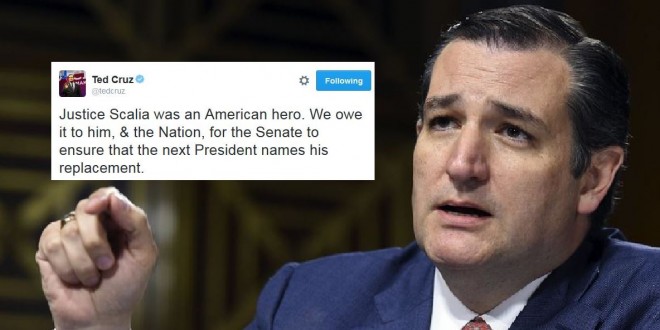 The news of Justice Antonin Scalia’s passing was only minutes old when major right wing figures began declaring that they will attempt to block President Obama from appointing Scalia’s successor. Among the first, unsurprisingly, is Ted Cruz, who has also issued a statement:

Today our Nation mourns the loss of one of the greatest Justices in history – Justice Antonin Scalia. A champion of our liberties and a stalwart defender of the Constitution, he will go down as one of the few Justices who single-handedly changed the course of legal history.

As liberals and conservatives alike would agree, through his powerful and persuasive opinions, Justice Scalia fundamentally changed how courts interpret the Constitution and statutes, returning the focus to the original meaning of the text after decades of judicial activism.

And he authored some of the most important decisions ever, including District of Columbia v. Heller, which recognized our fundamental right under the Second Amendment to keep and bear arms. He was an unrelenting defender of religious liberty, free speech, federalism, the constitutional separation of powers, and private property rights. All liberty-loving Americans should be in mourning.

Justice Scalia’s three decades on the Court was one of President Reagan’s most consequential legacies. Our prayers are with his beloved wife Maureen, their nine children, and their precious grandchildren.