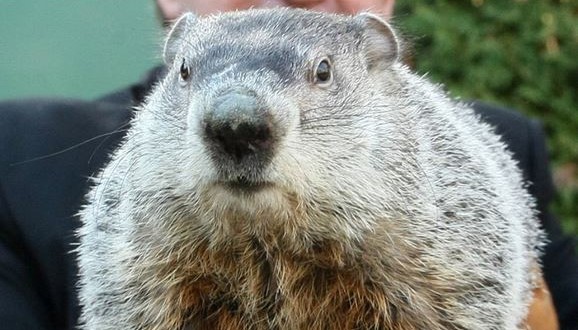 Last week’s record-setting blizzard aside, we still haven’t had much of a winter. And this morning Punxsutawney Phil said spring is coming early. NPR reports:

A crowd gathered at Gobbler’s Knob early this morning, awaiting the emergence of the groundhog named Punxsutawney Phil. After a tap of a cane on Phil’s tree-trunk cage, his door was opened, and the animal emerged.

He was held aloft to cheers and applause. Phil did not respond, other than to blink. Placed on top of the trunk, he attempted to flee before his actions were closely analyzed. Interpreting Phil’s behavior, the Groundhog Club emcee proclaimed, “There is no shadow to be cast! An early spring is my forecast!”

He added, “Take your jackets off, you’re not going to need them!” Few in the crowd followed that advice; the temperature this morning in Punxsutawney, Pa., was reported at 22 degrees.

Phil’s counterpart in New York City, Staten Island Chuck, made the same prediction this morning. Staten Island Chuck’s 2014 stand-in, Charlotte, was allegedly murdered by Mayor De Blasio when he dropped her during that year’s ceremony.

Previous Dr. Stabby: Ted Cruz Cheated In Iowa
Next I Will Hold You Ten Times