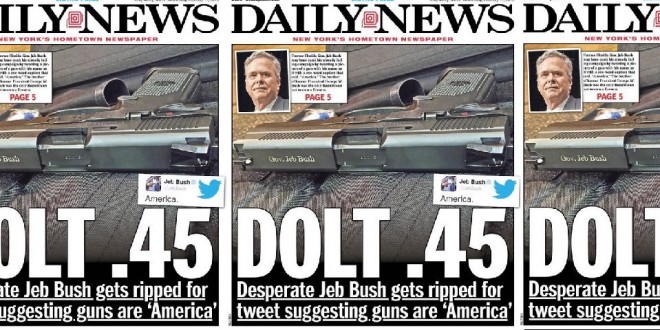 A flailing Jeb Bush brought out the big gun Tuesday to fire up his sinking presidential campaign — and it wasn’t his brother. The lone Republican presidential candidate to not own a firearm tweeted an image of one given to him Wednesday along with the single-word caption “America,” triggering a fusillade of mockery at the Republican candidate currently at sixth in the polls.

Bush received the FNX-45 pistol — which was engraved with “Gov. Jeb Bush” — after visiting a gunmaker, FN Manufacturing, in Columbia, S.C., The Los Angeles Times reported. In the 30 minutes after Bush posted the picture, it was retweeted more than 3,500 times and received about 2,700 likes. It appeared Bush had yet to learn the basics of firearm ownership — the safety was off in the photo relentlessly mocked on social media. “A gun with your name on it? Suicide is never the answer, Jeb,” one user tweeted.