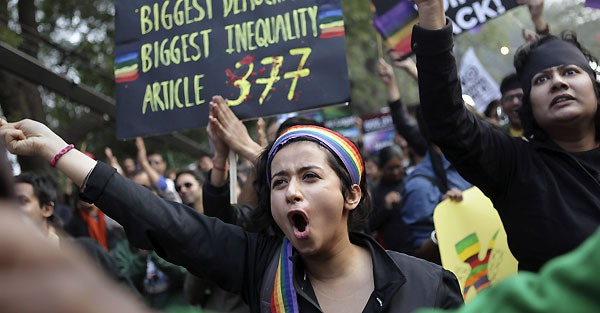 Indian gay rights activists shout slogans during a protest against a Supreme Court verdict that upheld section 377 of the Indian Penal Code that criminalizes homosexuality in New Delhi, India, Sunday, Dec. 15, 2013. Hundreds of gay rights activists gathered in India's capital and other cities across the country on Sunday to protest a decision by India's top court to uphold a law that criminalizes gay sex. (AP Photo/Tsering Topgyal)

Huge news out of India this morning. Video below. The BBC reports:

India’s Supreme Court has agreed to revisit a previous judgement that upheld a law criminalising gay sex. Three senior judges said the 2013 ruling would be re-examined by a larger bench of judges, in a move that has been welcomed by activists. The judges said that the issue was a “matter of constitutional importance”.

There has been a very vocal campaign to decriminalise homosexuality in India. On Tuesday, the court heard a “curative petition” – meant to “cure” an earlier court order perceived as a “miscarriage of justice”. The court said the five-judge bench would be headed by the chief justice of India.

No date for the hearing has been set.