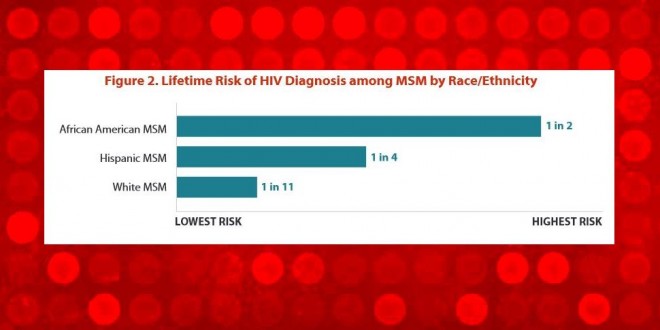 According to a first-of-its-kind study issued today by the Centers For Disease Control, black gay men in the United States have a 50% chance of an HIV+ diagnosis in their lifetime. All men who have sex with men face a 79-times higher risk of contracting HIV than do heterosexual men. From the CDC’s press materials:

A CDC study released in February 2016 provides the first-ever comprehensive national estimates of the lifetime risk of an HIV diagnosis for several key populations at risk and in every state.

Overall, the likelihood that an American will be diagnosed with HIV at any point during his or her life is now 1 in 99, an improvement from a previous study using 2004-2005 data that reported lifetime risk at 1 in 78. Despite overall progress, this study reveals stark disparities by race, risk group and geography.

Lifetime Risk of an HIV Diagnosis Varies by Mode of Transmission: Gay and bisexual men continue to be most affected by HIV in the U.S. At current rates, 1 in 6 men who have sex with men (MSM) will be diagnosed with HIV in their lifetime, making them 79 times more likely than heterosexual men to be diagnosed with HIV in their lifetimes. People who inject drugs are also at increased risk.

CDC’s High Impact Prevention approach focuses on delivering the most effective prevention strategies – including HIV testing, ongoing care and treatment for people living with HIV, pre-exposure prophylaxis (PrEP, a daily anti-HIV pill for high-risk uninfected people) and condoms – to the populations that are most heavily affected by the epidemic.

CDC devotes more HIV prevention resources to MSM, especially MSM of color, than to any other risk group. And since 2010, CDC has greatly increased HIV prevention funding to Southern health departments and community-based organizations, to reflect the burden of HIV in the region.