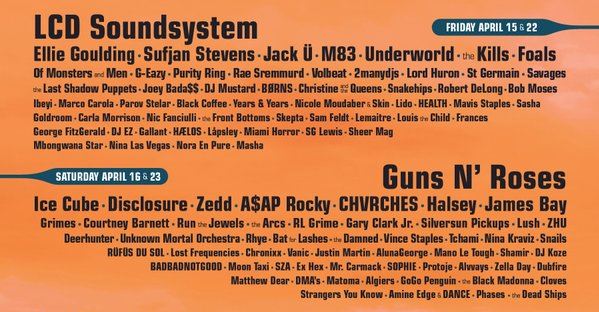 It’s a year of reunions for the headliners. Via Billboard:

Coachella announced its official lineup for 2016 on Monday (Jan. 4), with headliners Guns N’ Roses, LCD Soundsystem and Calvin Harris atop the bill. The two-weekend festival is scheduled for April 15-17 and 22-24.

A Guns N’ Roses reunion for the event had previously been confirmed to Billboard via multiple sources, marking the first show for the band with co-founders Axl Rose and Slash since 1993. The legendary rock band will perform Saturday night.

LCD Soundsystem’s Friday night slot will also be a reunion for the now iconic dance group, which last played together in 2011. After releasing its first new song in five years, “Christmas Will Break Your Heart,” sources told Billboard the band would be getting back together. The James Murphy-fronted outfit’s festival appearance had been one of the leading Coachella rumors leading up to this announcement.

I am familiar with about 10% of these acts.