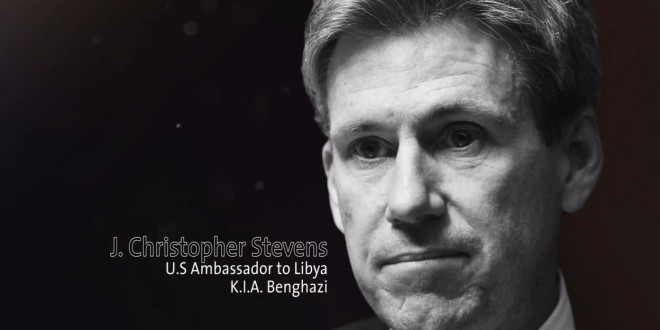 During last night’s Democratic debate viewers in some markets were subjected to one of the most repulsive attack ads imaginable. Paid for by Stop Hillary PAC, the ad features photographs of the four Americans killed in Benghazi as an announcer puts words in the mouths of the murdered men as if he were each of them. Democrats are furious. Via the Associated Press:

Democrats on the House Benghazi committee condemned the ad Wednesday and said Stevens’ image was used without his family’s permission. Rep. Elijah Cummings of Maryland, the senior Democrat on the panel, called the ad offensive and shameful. He and other Democrats urged the panel’s chairman, Rep. Trey Gowdy, R-S.C., to use his influence to get the ad removed immediately. Dan Backer, treasurer of the anti-Clinton group, said the ad was designed to “convey as powerful a message as possible” about the tragedy and Clinton’s possible role in it. “Four Americans died. They didn’t have to, but they did,” Backer said. Jamal Ware, a spokesman for Gowdy, said the ad does not mention either the Benghazi committee or Gowdy, and the committee played no role in the ad. “The gratuitous demand by Ranking Member Cummings is further proof Democrats do not care about investigating Benghazi, only playing politics like the makers of that ad,” Ware said.

Previous Budweiser And Miller Plan Merger
Next Sen. Rand Paul: If LGBT People Don’t Want To Get Fired They Should Just Stay In The Closet