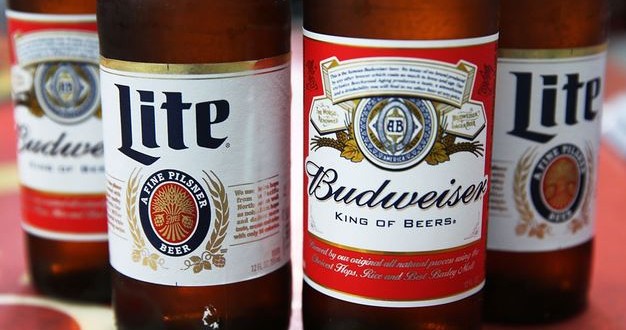 The parent companies of Budweiser and Miller, the world’s two largest breweries, have agreed to merge and create an entity that would control one-third of the global beer market.

After turning down five offers, British-based brewer SABMiller accepted in principle an improved takeover bid worth $106 billion from Anheuser Busch InBev, which along with Budweiser makes Corona, Stella Artois and Beck’s. However, the sheer scale of the deal is likely to run into resistance from regulators, notably in the U.S. and China, amid concerns it could stifle competition and decrease choice for consumers. They could force the companies to sell some brands — such as either the Budweiser or Miller brands. Having dismissed previous proposals over the past few weeks as undervaluing the company, the directors of SABMiller unanimously agreed to the newest offer. SABMiller’s two biggest shareholders, Marlboro owner Altria and Colombia’s BevCo would get both cash and shares for their combined 41 percent stake. AB InBev has until Oct. 28 to come up with a formal offer if U.K. regulators grant an extension to the takeover talks.

Meanwhile AB InBev is under investigation in the US over accusations that it has purchased distributorships in order to stifle the sales of craft beers. Via Reuters:

Many states require brewers to use distributors to sell their product, and once AB InBev buys a distributor, craft companies say they find that they can’t distribute their beer as easily and sales growth stalls. Antitrust regulators are also reviewing craft brewers’ claims that AB InBev pushes some independent distributors to only carry the company’s products and end their ties with the craft industry, two of the sources said, noting that the investigation was in its early stages. AB InBev’s purchase of several craft beer makers in recent years means that it is in a position to offer a greater variety of products itself. State regulators in California, where AB InBev announced wholesaler purchases in Oakland and San Jose in September, are also looking into the matter, the people familiar with the matter said.