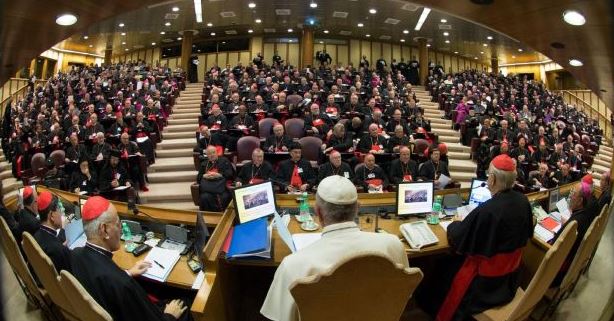 Catholics should stop using condescending language such as “pity” towards homosexuals and find ways to welcome them as sons and daughters of the Church, bishops have told a major gathering on the family. The comments supporting more inclusive language for homosexuals in the Church were made in the first two rounds of interventions at the closed-door gathering, known as a synod, Vatican officials told a news conference on Tuesday. The calls by over half a dozen bishops for more inclusive language on homosexuals stood out because conservative clerics made sure an interim report at a preliminary meeting last year deleted a passage they thought was too welcoming to gays. “(The bishops said) there must be an end to exclusionary language and a strong emphasis on embracing reality as it is. We should not be afraid of new and complex situations,” Father Tom Rosica said in summarising some of the interventions.

The above-linked report notes that conservatives love to quote former Pope Benedict, who described homosexuals as “intrinsically disordered” in a Catholic document written before he was elected pope. (Tipped by JMG reader Eric)

Previous Former NFL Star Kordell Stewart: I’m Not Gay And I Never Dated The “I’m Not Gay No More” Guy
Next Crazy Eyes: God Is Flooding The Carolinas Because He’s Pissed About USA Turning Its Back On Israel