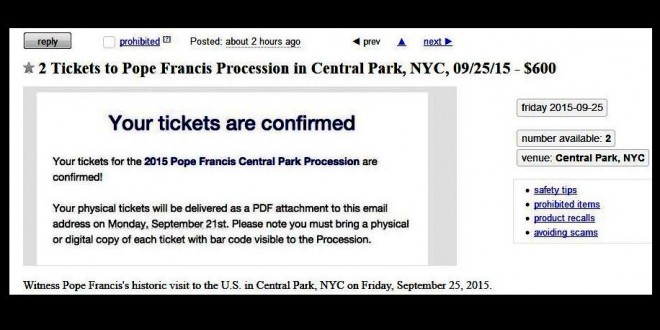 About 40,000 New York area residents learned on Thursday that they had won two tickets in a city-sponsored lottery to watch Pope Francis’ procession through Central Park on Sept. 25. A day later, many of them had been moved by the spirit of capitalism to offer those tickets on eBay and Craigslist, in some cases asking hundreds of dollars each. New Yorkers are not the only Americans eager to see the pope or make a quick dollar off his visit. But New York is the only stop on the pope’s tour that will not offer the public a chance to see him without a ticket. To watch his motorcade through Central Park and attend a Mass he will celebrate in Madison Square Garden later that day requires tickets, creating a potentially lucrative market for one of the city’s unofficial patron saints, the hustler.

The mayor’s office says that eBay and Craigslist have been quick to remove the ads as they appear. At this writing the above screen-capped offer and a dozen others can be found on Craigslist.

Previous OHIO: Lawyers For Jim Obergefell Hit State With Demand For $1.1 Million In Legal Fees
Next George Pataki: I Won’t Vote For Trump