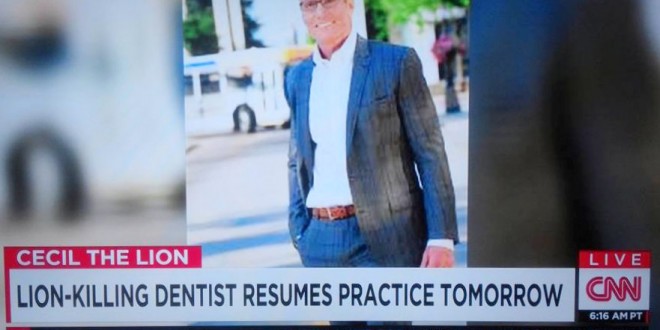 Lion-Killing Dentist Returns To Work: I Acted Legally And Did Nothing Wrong [VIDEO]

After hiding out for nearly two months, Minnesota’s infamous lion-killing dentist is going back to work tomorrow. Via the Associated Press:

Walter Palmer, who has spent more than a month out of sight after becoming the target of protests and threats, intends to return to his suburban Minneapolis dental practice Tuesday. In an evening interview conducted jointly by The Associated Press and the Minneapolis Star Tribune that advisers said would be the only one granted, Palmer said again that he believes he acted legally and that he was stunned to find out his hunting party had killed one of Zimbabwe’s treasured animals. “If I had known this lion had a name and was important to the country or a study obviously I wouldn’t have taken it,” Palmer said. “Nobody in our hunting party knew before or after the name of this lion.” Some high-level Zimbabwean officials have called for Palmer’s extradition, but no formal steps toward getting the dentist to return to Zimbabwe have been publicly disclosed. Friedberg, a Minneapolis attorney who said he is acting as an unpaid consultant to Palmer, said he has heard nothing from authorities about domestic or international investigations since early August.