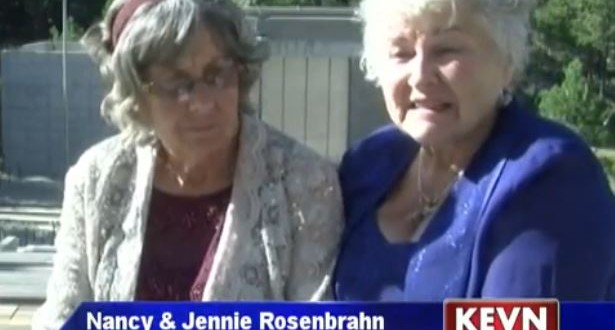 Sunday, history was made as same–sex couples gathered under the Mount Rushmore National Monument, to celebrate national marriage equality. The event, organized by the women who challenged South Dakota’s ban on same–sex marriages, took place in the amphitheater of the memorial, something that has never been done before. Nancy Rosenbrahn, who sued the state along with her wife Jennie, renewed their vows alongside of 6 other couples. Nancy and Jennie Rosenbrahn said, “That’s our first amendment speech, is to be able to say ‘I do’ in South Dakota, and for Jen and I, we get to say it in our home state.” The Rosenbrahns ran away to Minnesota years ago to wed, and Sunday’s event was a celebration of their long hard fight. The Rosenbrahns said, “Today, today is a validation, today is an affirmation that we belong.”

South Dakota’s marriage ban was struck down back in January but the ruling was stayed. Until the time of the Obergefell ruling, South Dakota remained a holdout state.

Previous The Man Has Burned [VIDEO]
Next Lion-Killing Dentist Returns To Work: I Acted Legally And Did Nothing Wrong [VIDEO]