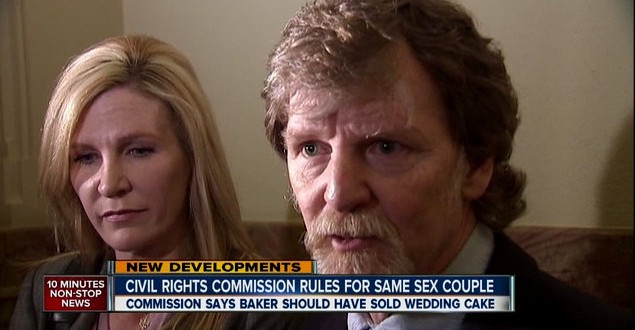 Last week a Colorado appeals court affirmed that Colorado baker Jack Phillips had violated state law by refusing to sell wedding cakes to gay couples. Today the Heritage Foundation is promoting, what else, a Christian crowd-funding drive for their newly-minted martyr. Phillips, it’s important to note, has not been fined at all. But send him some Jesus Bucks, stat! Via the Daily Signal:

“Cake artist” Jack Phillips has said his bakery, Masterpiece Cakeshop, has lost more than a third of its receipts since he stopped making all wedding cakes while the case makes its way through the legal system. “We hope it will relieve some of the financial pressure on Jack,” his brother-in-law, Jim Sander, said of the new fundraising effort in a phone interview Friday with The Daily Signal. “A business that has a 10 percent loss is a big deal in the Wall Street Journal. So a 40 percent loss is a big hit.” Sander said the “crowdfunding” campaign, through the website Continue to Give, a Christian-oriented service, went online Thursday afternoon—hours after the Colorado Court of Appeals decided Phillips and his business must provide cakes for gay marriages. The mission: Financially support Phillips, 59, and “protect his freedom of speech and freedom of religion.” The goal: Raise $200,000. Those who go to the “Support Jack Phillips” site may contribute any amount, making their names and size of donation public or keeping either private. Givers also may leave encouraging messages for Phillips.

Previous Pat Robertson: I’m Not A Psychic But I’ve Faith-Healed Thousands And Thousands Of People [VIDEO]
Next Cayman Islands Reaffirms Same-Sex Marriage Ban To Stop The Satanic Confusion Of Homosexuality