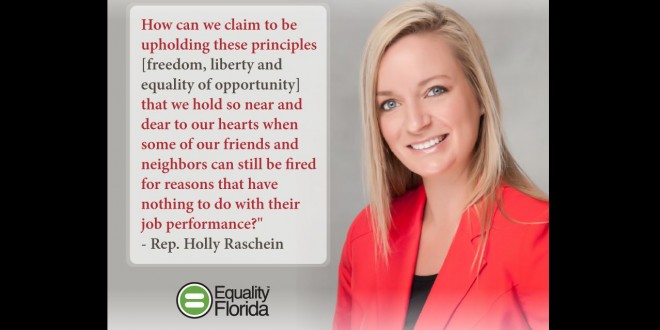 With the passage of the Equality Act at least one Congress away, the necessary work continues at the state level. The Miami Herald reports:

State Rep. Holly Raschein this week filed a bill for the 2016 legislative session that would ban workplace discrimination in Florida on the basis of sexual orientation and gender identity. “At my core, I feel this is the right thing to do,” Raschein told the Miami Herald. “I can be just as conservative as I want to be and still believe in eliminating discrimination of LGBT people.” Raschein said her proposal, known as the Florida Competitive Workforce Act, will be co-sponsored by state Sen. Joseph Abruzzo, a Wellington Democrat. The workplace act would revise current Florida law to add sexual orientation and gender identity or expression as “impermissible grounds for discrimination,” along with race, color, religion, sex, national origin, age, handicap or marital status. “You can get married in the state of Florida if you are an LGBT person, but you can still get fired. Why would I be sponsoring a bill and putting myself out there if there wasn’t a need?” Raschein said. “I’ve got friends, gay colleagues, gay acquaintances. I wouldn’t want to see them discriminated against.”

As I reported at the time, late in 2014 Raschein and Abruzzo co-sponsored a similar bill which obviously did not advance. The graphic used to illustrate this post was created in support of the 2014 bill.