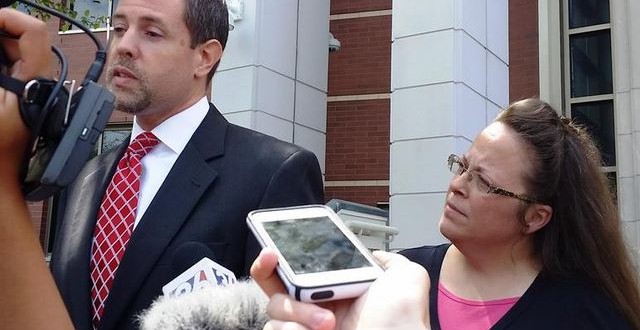 A federal judge ordered Rowan County Clerk Kim Davis on Wednesday to resume issuing marriage licenses despite her religious objection to same-sex marriage. U.S. District Judge David Bunning granted a preliminary injunction against Davis that was requested by Rowan County couples who want marriage licenses. Davis has refused to issue marriage licenses in her county since the U.S. Supreme Court legalized same-sex marriage nationwide in June. Davis is bound by her duties as a public servant to obey the law, Bunning wrote. “She is even free to believe that marriage is a union between one man and one woman, as many Americans do. However, her religious convictions cannot excuse her from performing the duties that she took an oath to perform as Rowan County clerk,” Bunning wrote.

Judge Bunning writes in his decision that Davis’ religious freedoms are not being infringed. “(Davis’) religious convictions cannot excuse her from performing the duties that she took an oath to perform as Rowan County Clerk. The Court therefore concludes that Davis is unlikely to suffer a violation of her free exercise rights under Kentucky Constitution.” The American Civil Liberties Union sued Davis on behalf of two same-sex and two opposite sex couples. The ACLU says Davis knew about the possibility of the Supreme Court ruling while she was running for the office. She was sworn in January 5, 2015. Attorney Dan Canon questioned whether Davis objected to issuing marriage licenses to people who had been divorced or interracial couples. She replied, “no.” Davis says she stopped issuing all marriage licenses because she did not want to discriminate against anyone. At the July 20 hearing Judge Bunning asked several questions. He seemed interested in the part of the state statute outlining who is authorized to perform marriages in Kentucky. He pointed out that County Clerks are not on the list of people who can perform marriages. Davis replied that while she does not perform the marriages, her name on the form says she approves of it.

Yet ANOTHER loss for the Liberty Counsel! Let the sadz commence!

UPDATE: Davis has already filed her notice of appeal.