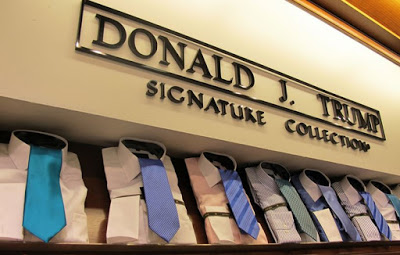 Macy’s. NBC. Nascar. Serta. The PGA. The list of large companies and brands moving to distance themselves from Donald Trump has snowballed since he entered the 2016 Presidential campaign with a racist diatribe against Mexican immigrants. Add one more: Phillips-Van Heusen, the clothing conglomerate behind Trump’s brand of mid-priced menswear. “Mr. Trump and Macy’s have both addressed the discontinuation of the Trump business at Macy’s, which was the exclusive retail account for the Donald J. Trump Signature Collection dress shirt and neckwear collections produced under our license agreement for the brand,” a spokesperson told Forbes exclusively on Tuesday. “We are in the process of winding down this business. The license agreement was scheduled to run through 2018.” PVH Corp. is best known as the parent company behind wildly successful apparel lines including Calvin Klein, Tommy Hilfiger, and Speedo.

PVH is the world’s second-largest brand licensor behind Walt Disney. Last year Trump reported $225M in name-licensing revenue. And now, without a licensor, he can’t even sell his shirts at the dollar store. (Tipped by JMG reader Elroy)