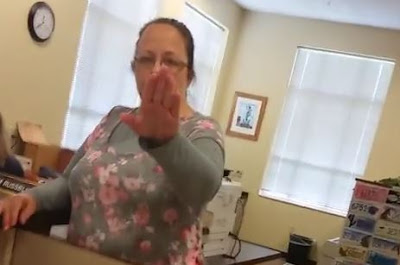 On Friday the ACLU sued the clerk of Rowan County, Kentucky for refusing to issue same-sex marriage licenses. On Monday a couple filmed their refusal in clerk Kim Davis’ office and the clip went wildly viral last night.

At 9:31 in the video a uniformed officer is shown entering the room and walking to the counter to converse with the employees. During this time, the video appears to show others waiting for services being helped in front of Mr. Moore and his fiance, even though they seemingly were there first. They ask to see Ms. Davis, only to be told by an employee that “She’s busy right now”. When the couple is finally allowed to approach the counter, they present copies of the recent Supreme Court decision as well as Kentucky Governor Steve Beshear’s executive order requiring all county clerks to issue marriage licenses. The employees are unmoved by this evidence and continue to deny the couple their marriage license. A woman presumed to be Clerk Davis finally appears at 11:12 in the video, and she begins her interaction with the couple by asking one of the female supporters recording the encounter to “put your phone away”. The supporter responds by saying “This is his right to have this filmed as well”. Ms. Davis continues to insist that the supporter stop filming, and she apparently complies since that is where the tape ends.

The clip has over 231K views at this writing. Davis is being represented by the Liberty Counsel.