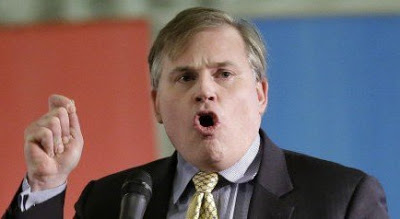 Brian Brown On The Equality Act

“Sponsored by the grossly-misnamed Human Rights Campaign special interest group, HR 3185 is breathtaking in its scope. It would allow gay and lesbian activists to persecute Americans in virtually every area of society — in employment, public accommodations, housing, credit, and a dozen other areas of civil life. Wherever federal law prohibits racial discrimination, it would also prohibit ‘discrimination’ based on ‘sexual orientation and gender identity.’ The legislation puts in the crosshairs anyone who believes God created people male and female. It would declare that a traditional view of human sexuality is hateful and bigoted and treat Christians, Jews and other people of faith just as the law treats racists. HR 3185 specifically denies someone who has been targeted the ability to rely on the provisions of the Religious Freedom Restoration Act as a defense against the complaint of discrimination.

“Please act today to help us defeat HR 3185. Click here to send a message to your federal representatives asking them to vote against this dangerous proposal that will result in rampant persecution of Americans in virtually every area of civil life. It is imperative that members of Congress hear immediately that the American people will not tolerate the creation of powerful special rights for one segment of society, and allow them to use the power of the federal government to persecute anyone who disagrees with them.” – Hate group leader Brian Brown, who is very upset at the prospect of LGBT Americans being granted the same protections that Christians have enjoyed for over half a century. And note that he evades calling the bill by its name.