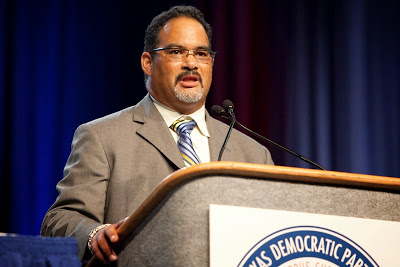 TEXAS: Lawmaker Vows To Kill His Own Bill Rather Than Allow Anti-Gay “Defy SCOTUS” Marriage Amendment

From the Houston Chronicle:

A Democratic state senator has dredged up anti-gay marriage legislation that advocates thought was dead this session, attaching the language to an uncontroversial county affairs bill under the noses of his fellow Democrats. While gay rights advocates decried the move, the bill’s original sponsor in the House said he would never let his legislation pass with the anti-same-sex marriage language in-tact. “I’m the author of the bill. I will resolve the bill,” said Rep. Garnet Coleman, D- Houston, a staunch gay marriage advocate.

House Bill 2977, as Coleman originally filed it, was an uncontroversial county affairs placeholder bill, meant to act as a vehicle for lawmakers to ensure important local issues can be passed late in the session. As the bill was headed to the Senate committee for approval this week, however, Sen. Eddie Lucio, Jr. attached a number of other bills to Coleman’s legislation, including one that would seek to block a Supreme Court ruling in favor of gay marriage.

If the bill passes in the GOP-dominated Senate, which Coleman expects it to, it would need to return to the House, where the lower chamber’s members would have to concur with the changes. Coleman said if he can’t strip the anti-gay marriage off his legislation, then he would withdraw it completely. “If I can’t get it off, then the bill goes to bill heaven,” Coleman said. “I don’t support that legislation or that language.”