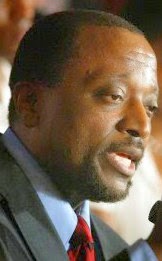 Alan Keyes: SCOTUS Ruling For Gay Marriage Will Be “Just Cause For War”

“If the United States Supreme Court presumes to impose any redefinition of marriage on the states, respectively, or the people, without addressing the issue of unalienable right it involves, with reasoning that respects God-endowed right (which is the logic by which the American people asserted, and still claim to possess and exercise, sovereign authority over themselves), the Court’s decision will be an attack on the very foundation of constitutional government, of by and for the people of the United States. It will be a high crime and misdemeanor that effectively dissolves the just bonds of government between and among the states, and among the individuals who compose the people of the United States. It will therefore be just cause for war.” – Alan Keyes, writing for World Net Daily.