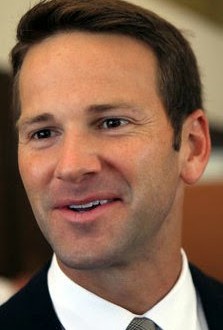 Thanks in part to his own Instagram account, Rep. Aaron Schock is facing more questions about his spending on travel and personal expenses. Via the Chicago Tribune:

Illinois Rep. Aaron Schock, a rising Republican star already facing an ethics inquiry, has spent taxpayer and campaign funds on flights aboard private planes owned by some of his key donors, The Associated Press has found. There also have been other expensive travel and entertainment charges, including for a massage company and music concerts. The expenses highlight the relationships that lawmakers sometimes have with donors who fund their political ambitions, an unwelcome message for a congressman billed as a fresh face of the GOP. The AP identified at least one dozen flights worth more than $40,000 on donors’ planes since mid-2011. The AP tracked Schock’s reliance on the aircraft partly through the congressman’s penchant for uploading pictures and videos of himself to his Instagram account. The AP extracted location data associated with each image then correlated it with flight records showing airport stopovers and expenses later billed for air travel against Schock’s office and campaign records. Asked for comment, Schock responded in an email on Monday that he travels frequently throughout his Peoria-area district “to stay connected with my constituents” and also travels to raise money for his campaign committee and congressional colleagues.