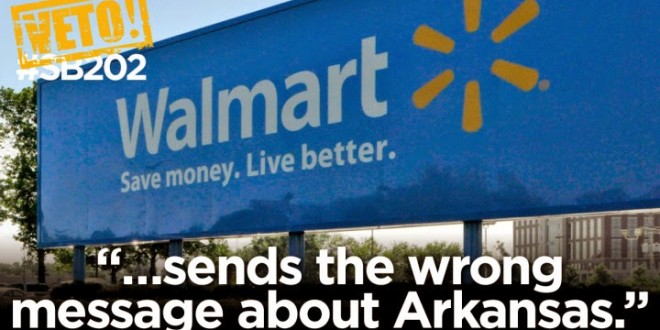 ARKANSAS: Walmart Weighs In Too Late

“Every day, in our stores, we see firsthand the benefits diversity and inclusion have on our associates, customers and communities we serve. It all starts with the core basic belief of respect for the individual. And that means understanding and respecting differences and being inclusive of all people,” Wal-Mart spokesman Lorenzo Lopez said in a statement. “We feel this legislation is counter to this core basic belief and sends the wrong message about Arkansas.”
Opponents of the ban were weighing a lawsuit to challenge the measure’s constitutionality. “It’s just another scar on the face of a state that really doesn’t need any more signs of an intolerance toward outsiders, toward people that some people disapprove of,” said Rita Sklar, executive director of the American Civil Liberties Union of Arkansas. The measure was introduced in reaction to an ordinance in the city of Fayetteville, where voters expanded the city’s anti-discrimination protections. Eureka Springs in northwest Arkansas enacted a similar measure earlier this month, and Little Rock elected officials are weighing expanding that city’s discrimination protections.

Since Gov. Asa Hutchinson refused to issue a veto or sign the bill, it becomes law today and goes into effect 90 days after the end of the current legislative session in the fall. Walmart received a 90% rating in the 2015 HRC Corporate Equality Index.