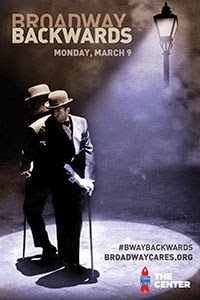 The tenth annual Broadway Backwards is next month and to celebrate the anniversary some of the show’s most noted performers will be returning.

The roster of stars joining this year’s Broadway Backwards includes Tony Award winners Len Cariou (Sweeney Todd, TV’s “Blue Bloods”) and Brian Stokes Mitchell (Kiss Me, Kate), Tony nominee Tony Yazbeck (On the Town) and Broadway favorites Tituss Burgess (The Little Mermaid), Julie Halston (You Can’t Take It With You), Ann Harada (Rodgers + Hammerstein’s Cinderella, Avenue Q), Florence Henderson (Oklahoma!, TV’s “The Brady Bunch”), Jackie Hoffman (On the Town) and Aaron Lazar (The Last Ship). Additional performers will be announced in the coming weeks. Performers subject to change. “I’m thrilled to welcome back these talented performers for this special 10th edition of Broadway Backwards,” creator Robert Bartley said. “Thanks to them and the hundreds of talented performers who have participated in the nine editions of Broadway Backwards so far, we’ve been able to raise hundreds of thousands of dollars that help provide lifesaving medications, counseling and support for LGBT youth and those struggling with HIV/AIDS.” This year’s edition of Broadway Backwards will be performed at 8 PM at Broadway’s Al Hirschfeld Theatre (302 West 45th Street, NYC), home to the Tony Award-winning Best Musical Kinky Boots.

Broadway Backwards is my favorite Broadway event and I’ve only missed one since the show launched. Get tickets here. You might enjoy my slideshow of the 2009 show where Florence Henderson and Eve Plumb (Jan Brady) had an encounter in a women’s prison.