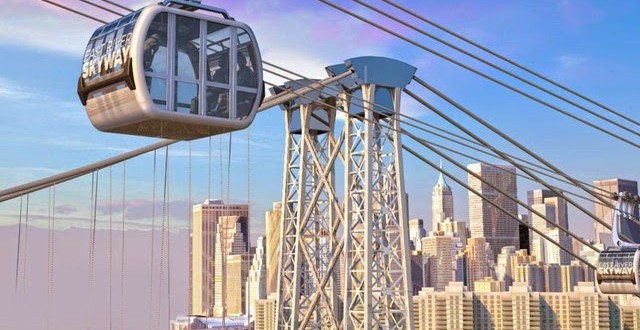 New York City already offers tram service between the Upper East Side and Roosevelt Island, but a local businessman has proposed a new “high-speed” gondola system that would initially provide service between Williamsburg and lower Manhattan. Gothamist is digging it:

Picture this: it’s 100 degrees out, you descend into the subway station to find a packed platform, you stand for 10 minutes waiting for a train as the sweat forms a glistening husk around your entire body. What if you could skip all of that, and float way above the river to your destination? CityRealty’s president Dan Levy has proposed an East River Skyway, and we are on board—this high-speed gondola would connect a number of areas along Manhattan and the Brooklyn and Queens waterfronts—kind of similar to the East River Ferry route. If the real estate exec’s proposal ever takes flight, the first phase would connect the Williamsburg waterfront to Downtown Manhattan (a trip to Delancey street would only take 3.5 minutes!), South Williamsburg and the Brooklyn Navy Yard. After that, an extension north to Greenpoint, LIC and Midtown East, and south to DUMBO and the South Street Seaport area would be added. After that, who knows! Hoboken? The moon?

The proposed cost is $100M, which is probably less than the cost of a new subway station. There’s a slick website in support of the proposal.

Previous Symantec Drops LGBT Site Blocking
Next “Nonpartisan” NOM: Send Us Money To Help The GOP Win The US Senate