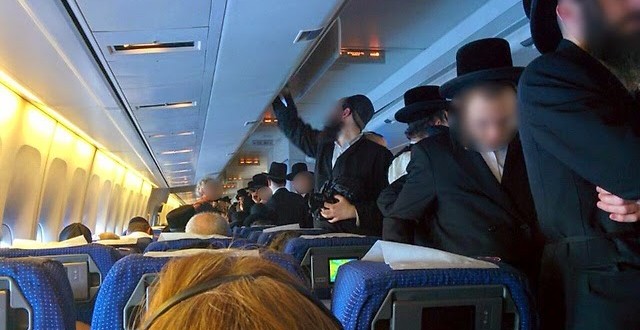 A flight from New York City to Tel Aviv was delayed on Wednesday because ultra-Orthodox passengers refused to sit next to women.

According to the passengers who were on the plane, their fellow ultra-Orthodox travelers refused to sit next to women prior to the takeoff, which not only delayed the flight, but caused actual chaos to ensue on the plane. “People stood in the aisles and refused to go forward,” said Amit Ben-Natan, a passenger who was on board the plane. “Although everyone had tickets with seat numbers that they purchased in advance, they asked us to trade seats with them, and even offered to pay money, since they cannot sit next to a woman. It was obvious that the plane won’t take off as long as they keep standing in the aisles.”

Galit, another traveler on the flight, said the ultra-orthodox passengers suggested she and her spouse split up to better accommodate their desired seating arrangements: “Why should I agree to switch places?” she said with anger. After she refused, the haredi man seated next to her conceded, but it was only temporary: “I ended up sitting next to a haredi man who jumped out of his seat the moment we had finished taking off and proceeded to stand in the aisle.” It seems that after takeoff a large portion of the haredi travelers took to the aisle to pray which, according to their fellow travelers, crowded the aisle and caused the flight to be unbearable. “I went to the bathroom and it was a mission impossible, the noise was endless,” Galit said.

The airline has promised to look into “future steps” to prevent the issue from recurring.

Previous Ayn Rand: How Is She Still A Thing?
Next British Survey: 16% Have Had Gay Sex