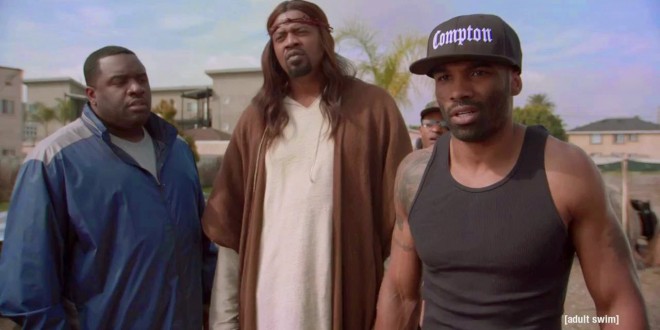 Joe,  Religious mockery, blasphemy and extreme profanity, all directed at the Christian faith flooded the airwaves last night. Turner Broadcasting System (TBS) did not hold back its disdain for Jesus, as TBS’s Cartoon Network delivered on its promise to be offensive and vile. “Black Jesus” was even worse than its promotions portrayed in the trailer leading up to the broadcast. In the 30-minute premiere, Jesus is recruited by his friend’s mother to buy a block of “weed” for a party. He is the “only one” she trusts with the $2,000 she gets as her tax-refund check. When the drug deal goes bad, his friends riding in the car with him abandon him and escape police, while Jesus is arrested. In the end, he is released from prison when the marijuana miraculously turns out to be salad greens.

In this episode entitled “Smokin’, Drinkin’, and Chillin'”:  88 profanities are used, including God’s name in vain (MA-L rating).  Jesus uses the f-word multiple times, uses God’s name in vain.  Jesus smokes marijuana and complains about having to share it. Jesus is arrested when a drug deal he is leading goes bad. The Jesus character irreverently refers to God as “Pops,” himself as “lord and savior,” and is continually obsessed with alcohol and drugs. TAKE ACTION: Contact the companies who actually sponsored TBS’s anti-Christian “Black Jesus.” American Eagle, Foot Locker, AutoTrader.com, Haribo Candy and Radio Shack were the major advertisers who paid corporate dollars to promote its products in association with the content of the program. Let these companies know that their advertising dollars are supporting bigotry and animosity toward people of faith.