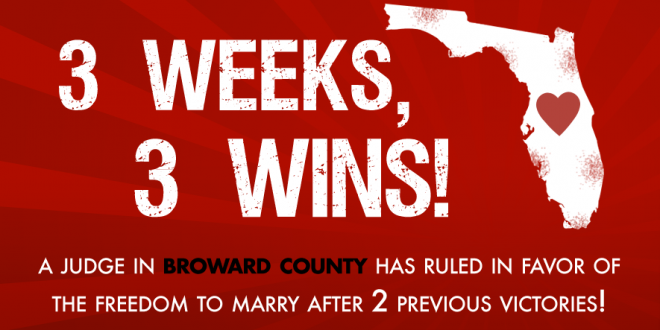 Via the Orlando Sentinel:

A state circuit judge in Broward County is expected to make history today by ordering the state of Florida to recognize a gay marriage performed in another state. If that is the decision of Circuit Judge Dale Cohen, it would be the third time in as many weeks that a Florida judge has ruled that the state’s ban on gay marriage is unconstitutional. This one would be unique, however, because it’s the first requiring the state to recognize a gay marriage conducted elsewhere. The other two – one July 17 by a judge in Monroe County and another July 25 by a Miami-Dade judge – only required local clerks of court to begin issuing marriage licenses to same-sex couples. Those decisions have not yet been enforced because of pending appeals, meaning no same-sex couple has gotten married in Florida. In today’s case, a West Palm Beach woman is asking Cohen to give her a divorce. Heather Brassner and Megan Lade were joined in a civil union July 6, 2002, in Vermont, according to Brassner’s attorney, Nancy Brodzki, of Coral Springs. The couple broke up, and Lade disappeared, Brodzki said. Now Brassner wants to get on with her life.

The ruling is due at any time today. Keep an eye on Equality Florida’s Twitter feed.

UPDATE: And that makes three-for-three in Florida!

Via Freedom To Marry:

The ruling in today’s case, from Broward County Circuit Judge Dale Cohen, is the third marriage ruling in three weeks, following a July 17 ruling in Monroe County’s Huntsman v. Heavilin and July 25’s ruling in Miami-Dade County’s Pareto v. Ruvin. In all 3 cases, judges ruled that banning same-sex couples from marrying is unconstitutional. All three rulings are stayed, and the two previous rulings have been appealed by Florida Attorney General Pam Bondi. For now, today’s decision only applies to Broward County. The next step for the Miami-Dade and Monroe County decisions is review by Florida’s 3rd Circuit Court of Appeals. Last week, the plaintiffs in both cases moved to consolidate their cases and filed a motion seeking review directly by the Florida Supreme Court.

Today, Broward Circuit Judge Dale Cohen struck down Florida’s marriage ban, affirming that the denial of marriage equality to same-sex couples in Florida is unconstitutional. The judge’s ruling applies to recognition of out-of-state same-sex marriages, as well as overturning Florida’s ban on same-sex marriage – Broward County only. This marks the third time in the past few weeks that a Republican-appointed judge in Florida has ruled on the side of marriage equality. “Every win in court brings us closer than we’ve ever been to the freedom to marry in Florida,” said Nadine Smith, CEO of Equality Florida. “We look forward to the day when all loving, committed couples and their families enjoy the same protections, opportunities and responsibilities of marriage under the law. Every passing day inflicts real hardships on families who are denied the legal protection and dignity that marriage equality provides.”