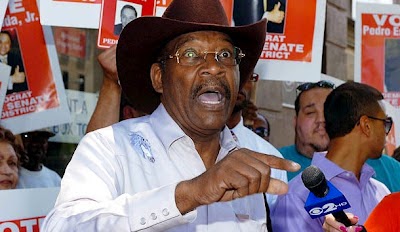 New York state Sen. Rubin Diaz, who is possibly the most viciously anti-gay Democrat in the nation, claims to be bringing 100 buses of Hispanic evangelicals to NOM’s hate march in Washington DC next month. Brian Brown has issued a money beg:

I just recently got off the phone with my good friend, New York State Senator, Rev. Ruben Diaz, who will be speaking at the March again this year. He told me that he plans to bring down over 100 buses to the March from the Bronx this year! He is calling it the “Second Annual Bus Vigil to Washington.” He plans to depart New York at 4:00 am in a spiritual convoy of activists coming to the nation’s capital to defend marriage! That’s over 5,000 people — overwhelmingly Latino and African-American constituents — that a single political and spiritual leader wants to bring to Washington DC this summer! Beyond even that, the requests we’ve received from spiritual leaders have been truly overwhelming. Almost daily we are receiving requests from poor churches, asking us for assistance in bringing thousands of marriage champions to Washington DC to attend the March and make their voices heard in our nation’s capital. We have committed to helping Rev. Diaz fund those 100 buses out of New York and we’d like to help fund as many additional buses as possible so that everyone who wants to attend the March will be able to do so!

RELATED: During New York’s battle for marriage equality, Diaz staged two massive anti-gay marches in New York City for which he bused in thousands of Hispanic evangelicals from northern New Jersey. At the second march in 2011, Brown and Diaz strolled arm-in-arm to the steps of the Bronx County Courthouse where a Christian radio preacher invoked Leviticus, bringing roars of approval when he declared that gay people are “worth of death.” My slideshow of that hate march is here.