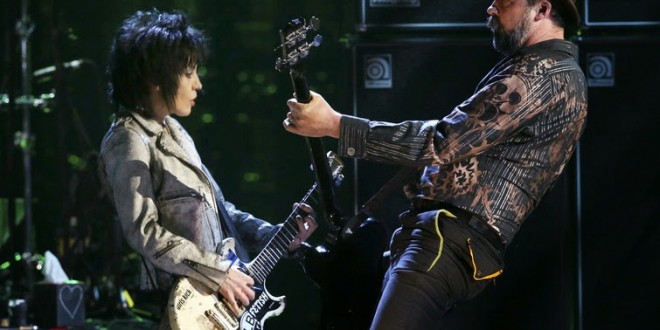 Last night the Rock & Roll Hall of Fame inducted its 2014 class at Brooklyn’s Barclays Center, where Joan Jett was among the women who stepped in to front inductees Nirvana in the place of Kurt Cobain, who committed suicide 20 years ago last week.

Nirvana’s emotional induction included speeches from Cobain’s widow, Courtney Love, as well as his mother, Wendy O’Connor. R.E.M’s Michael Stipe, whom Cobain greatly admired, gave the official induction. “Nirvana captured lightning in a bottle,” he said. The band pushed “us forward towards our individual and collective potential.” He saluted Nirvana’s anti-mainstream stance and specifically Cobain for offering an “outsider voice for the fags, the fat, the fed-up and the bullied.” “Kurt, I miss you,” he said, rawly. Cobain’s mother fought back tears as she said of her son “he would have been so proud. He’d say he wasn’t, but he would be.” An uncommonly terse Love echoed that sentiment, “Tonight, he really would have appreciated.” Love also vowed to give the award to their daughter, Francis Bean, “who isn’t here because she’s sick.” Novoselic thanked Cobain for fronting music “that means so much for so many people.” Joan Jett sang lead with the band on a ferocious “Smells Like Teen Spirit.” Several other women also sang Cobain’s parts with genuine brilliance and edge: Kim Gordon of Sonic Youth on “Aneurysm,” Annie Clark on “Lithium” and Lorde on “All Apologies.”

Other inductees were the ever feuding KISS, the E Street Band, Yusaf Islam (formerly Cat Stevens), Peter Gabriel, Hall & Oates, and Linda Ronstadt, who was unable to attend due to her battle with Parkinson’s. Artists become eligible for induction 25 years after the release of their first record.

Previous PHILADELPHIA: Tourist Raped, Robbed, And Beaten By Man He Met On Grindr
Next Former Sen. Scott Brown’s Truck Is Back