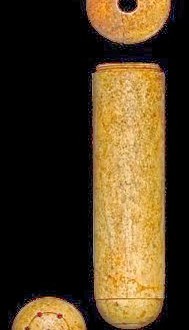 Archeologists digging at New York City Hall have unearthed a douche that dates to the early 19th century.

“At first we thought it was maybe a spice-grinder or needle case,” said Alyssa Loorya, president of Chrysalis Archaeology, the firm that oversaw the dig, part of a Department of Design and Construction rehabilitation project at City Hall. “We were stumped.” The early incarnation of a douche — a hollow, cylinder with small holes at its top made from unidentified mammal bone — was found in a massive heap of buried garbage that dates back to between 1803 and 1815, Loorya said. The centuries-old trash, in a pile found three feet underground and extending to a depth of about six feet was also filled with liquor bottles and various items associated with food waste, suggesting it may have all came from one celebratory event, Loorya said.

According to a researcher, women would fill the device with an astringent made from minerals or tree bark for use as a contraceptive.