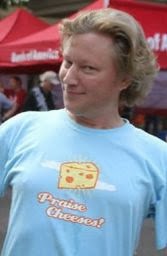 Drew Swope, the North Carolina grocery store worker who was fired this weekend after GOP Gov. Pat McCrory tattled on him for making a rude comment, has been asked for his resume by Democratic Charlotte Mayor Pat Cannon. From Swope’s Facebook page: “The mayor of Charlotte, Pat Cannon, just called me and asked me to send him my resume and he’ll see if he can help me find a position. This man is my hero. Thanks Mr. Cannon!”

But there’s much more to the story. Swope, it was learned today, is openly gay and he believes McCrory’s anger at him was spurred, in part, by a “swishy move” that Swope made after telling McCrory, “Thanks for nothing.” Via Talking Points Memo:

“When he started yelling at me, it was a sudden turn because I made sort of a swishy move,” Swope said. “I’ve been discriminated against a lot, and I can see that moment when someone just suddenly goes ballistic because of this other thing, not what you said or did.” He acknowledged that he “can’t get inside [McCrory’s] mind,” but is certain that homophobia was at work. “I don’t know what he was thinking, but I’ll tell you from man to man: He was hating on me for being a fag,” Swope said. McCrory’s office did not immediately respond to TPM’s request for comment, but a spokesman told the Charlotte News & Observer that the governor never raised his voice. The spokesman also said that Swope flashed an obscene gesture, an accusation that Swope emphatically denied.

TPM notes that Swope has called McCrory a “fag” several times on his Facebook page since the firing. Swope also writes, “And please don’t kick anyone in the nuts. Especially the governor who has none.” That comment comes because when the press became critical of McCrory’s tattling, his staff delved into Swope’s social media history and uncovered a January post in which he suggested that somebody kick McCrory in the groin.

RELATED:  In 2012, McCrory supported North Carolina’s Amendment One, which placed a ban on same-sex marriage into the state constitution. While Charlotte mayor, McCrory threatened to cut city funding for the arts over a staging of the Pulitzer Prize-winning AIDS-themed play, Angels In America. While governor, McCrory repealed North Carolina’s Racial Justice Act, which permitted death row inmates to challenge their sentences on the basis of racial discrimination. He also signed bills that require photo IDs from voters and reduce the number of early voting days. Last year McCrory taunted abortion rights protesters by bringing them a plate of cookies after signing a bill which restricts abortion access.

Previous GAMBIA: President Promises To “Fight Homosexuals Like We Fight Malaria”
Next Courtney Act – To Russia With Love