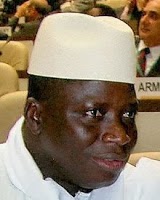 GAMBIA: President Promises To “Fight Homosexuals Like We Fight Malaria”

“We will fight these vermins called homosexuals or gays the same way we are fighting malaria-causing mosquitoes, if not more aggressively. We will therefore not accept any friendship, aid or any other gesture that is conditional on accepting homosexuals or LGBT as they are now baptised by the powers that promote them. As far as I am concerned, LGBT can only stand for Leprosy, Gonorrhea, Bacteria and Tuberculosis; all of which are detrimental to human existence.” – Gambian President Yahya Jammeh, in a nationally televised speech made today to celebrate 49 years of independence from Britain. Jammeh and 90% of Gambians are Muslim.

PREVIOUSLY ON JMG: Jammeh is named one of 2013’s worst anti-gay villains by Human Rights Watch. Jammeh compares himself to Mohammed because he has “cured” 68 AIDS patients with herbs.  Jammeh says no amount of foreign aid will bring LGBT rights to Gambia. Jammeh threatens to decapitate “any homosexuals found in Gambia.”