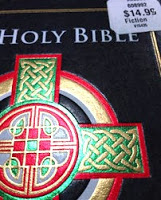 Fox News reporter Todd Starnes, who has never met a story that he couldn’t twist out of any remaining shred of truth, is on the warpath against Costco.

What do the Bible, “The Hunger Games” and “Fifty Shades of Grey” have in common? All three are works of fiction, according to the booksellers at Costco. Pastor Caleb Kaltenbach made that shocking discovery last Friday as he was shopping for a present for his wife at a Costco in Simi Valley, Calif. “All the Bibles were labeled as fiction,” the pastor told me. “It seemed bizarre to me.” Kaltenbach is the lead pastor at Discovery Church, a non-denominational Christian congregation in southern California. He thought there must be some sort of mistake so he scoured the shelf for other Bibles. Every copy was plastered with a sticker that read, “$14.99 Fiction.” “People are pretty shocked and upset,” he told me. “We are supposed to be living in an era of tolerance, but what Costco did doesn’t seem too tolerant.” I doubt they would label the Koran as fiction, Pastor Kaltenbach said. Heaven help us if they did.

A Costco spokesperson says the labeling was an error that will be fixed, but that hasn’t stopped Starnes and the Family Research Council, who are busily tweeting outraged denouncements.