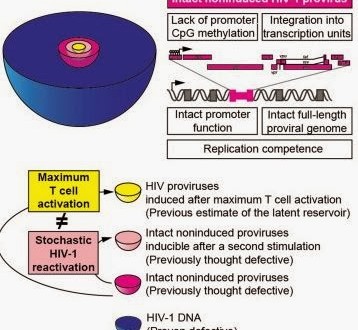 Just when some scientists were becoming more hopeful about finding a strategy to outwit HIV’s ability to resist, evade and otherwise survive efforts to rid it from the body, another hurdle has emerged to foil their plans, new research from Johns Hopkins shows. In a cover-story report on the research to be published in the journal Cell online Oct. 24, Johns Hopkins infectious disease experts say the amount of potentially active, dormant forms of HIV hiding in infected immune T cells may actually be 60-fold greater than previously thought.

The hidden HIV, researchers say, is part of the so-called latent reservoir of functional proviruses that remains long after antiretroviral drug therapy has successfully brought viral replication to a standstill. The disappointing finding comes after a three-year series of lab experiments, which they say represents the most detailed and comprehensive analysis to date of the latent reservoir of HIV proviruses. If antiretroviral therapy is stopped or interrupted, some proviruses can reactivate, allowing HIV to make copies of itself and resume infection of other immune cells.

The abstract is here. (Tipped by JMG reader Bill)