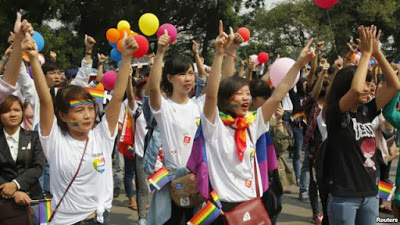 Yesterday hundreds rallied in Vietnam’s capital city of Hanoi in support of next week’s legislative debate on same-sex marriage.

The event was part of the “Toi Dong Y” festival, which translates as “I do,” or “I agree”, organized by lesbian, gay, bisexual and transsexual (LGBT) groups across the country. One participant, 18-year-old Truong Duc Anh, said same-sex marriage is an important topic for Vietnam. He said he believes love does not have a wrong or a right side and the most important thing is that society treats people equally when it comes to love. The festival is being held ahead of a planned debate on revisions to the Marriage and Family Law at the National Assembly on November 5. The draft does not include the legalization of same-sex marriage, but removes the article banning them in the current law and includes provisions for same-sex couples who live together.