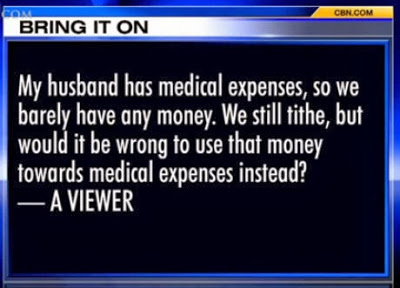 In today’s “Bring It Online” segment on the 700 Club, Pat Robertson fielded an email from an elderly woman who is living on Social Security and wonders if it would be a sin to stop tithing in order to help pay her sick husband’s medical bills. Robertson responded: “Read carefully what the bible has to say in Malachi. He says, ‘Prove me with your tithes and offerings and I will rebuke the devourer for your sake.’ Your husband has all these medical problems because the devourer has not been rebuked! You need to rebuke him, you give your tithes faithfully and God, he says, ‘I will rebuke the devourer, the person who is eating up your money and eating up your health.’ So, you want to be healthy, that’s a promise in the word!” Start at the 3:20 mark in the clip below.