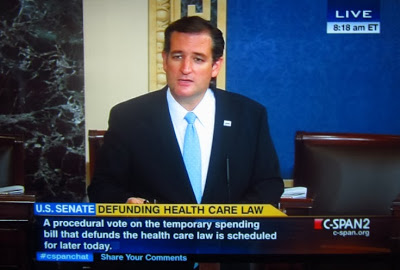 As of this writing Sen. Ted Cruz has been talking for over 17 hours.

A final vote on passage of the stop-gap spending measure is expected to come late Sunday if all the time for debate is used. This leaves the House of Representatives with less than a day to work on the continuing resolution before the Oct. 1 deadline at which point the government would shut down. Cruz has used his marathon session to make the case for why the Affordable Care Act should be defunded in the continuing resolution. He has repeatedly called Obamacare a “train wreck” and read tweets from constituents praising him for his commitment to the issue. But at times, his speech has turning playful as he read his daughters a bedtime story through C-SPAN. “I do not like green eggs and ham. I do not like them, Sam I am,” Cruz said quoting Dr. Seuss’ “Green Eggs and Ham.”Cruz even quoted popular television show “Duck Dynasty” and the lyrics of Toby Keith’s “Courtesy of the Red, White and Blue.”