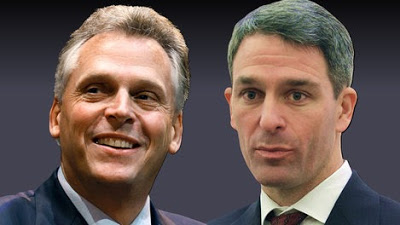 McAuliffe has a 48 – 42 percent lead over Republican State Attorney General Ken Cuccinelli in the race to become Virginia’s next governor, according to today’s Quinnipiac University poll, the first survey in this race among voters likely to vote in the November election. McAuliffe carries Democrats 92 – 1 percent while Cuccinelli wins Republicans 90 – 6 percent. Independent voters are divided with 42 percent for McAuliffe and 44 percent for Cuccinelli. The candidates break even 45 – 46 percent among men while McAuliffe takes women 50 – 38 percent. Cuccinelli wins white voters 50 – 42 percent, while black voters go Democratic 74 – 7 percent.

RELATED:  In June Cuccinelli filed an appeal with the Supreme Court to keep Virginia’s ban on sodomy.  In 2011 Cuccinelli ordered Virginia’s Board Of Social Services to deny adoption rights to same-sex couples. That same year he fired an Atlanta law firm because it had refused to defend DOMA for the GOP.  In 2010 he declared that “gays are a detriment to our culture.” Defying long-standing tradition, Cuccinelli has refused to step down as attorney general during his run for governor.