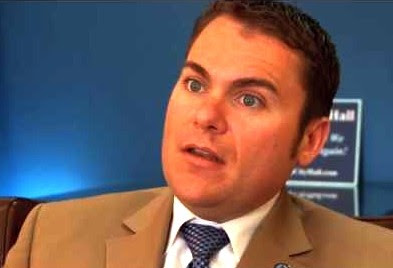 Homocon Carl Demaio: I Was Not Jerking Off In That City Council Men’s Room

“A lie was told. A lie that is disgusting, humiliating and nothing more than a character assassination attempt and I’m not going to let that stand. I’m speaking out because I have the truth on my side. In politics, you see people make accusations all the time. And, you know, I’ve had people criticize me before and I usually let it roll off my back. My focus has always been to have a positive message, talk about solutions for San Diego and not worry and not sweat the small stuff, the criticism, the attacks, the personal attacks. But this one crosses the line. It’s so gross. It’s so false, that I have to speak out. I have to present the truth. It’s not only damaging to me and my reputation. But this lie also continues the embarrassment that we’ve just suffered as a city.” – Former GOP San Diego mayoral candidate Carl Demaio, denying reports that he’d been caught jerking off in the City Council men’s room.

From the original story:

RELATED:  Another news story alleges that DeMaio was secretly behind the drive to recall disgraced former Mayor Bob Filner, presumably with the intent to position DeMaio to replace him.

PREVIOUSLY ON JMG:  In July the Log Cabin Republicans endorsed DeMaio’s bid for the US House. Some believe DeMaio will put aside that campaign to run again for mayor of San Diego. Also in July, local LGBT activists organized a campaign to boo DeMaio during this year’s pride parade, noting that he’d been reluctant to endorse marriage equality and had accepted donations from backers of Proposition 8. DeMaio, a wealthy political consultant, is vehemently anti-union and has
vowed that LGBT rights will never affect his political decisions.