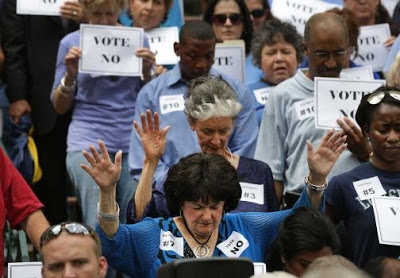 From the San Antonio Express-News:

More than 350 black and Latino ministers and members of their flocks rallied against proposed updates to the city’s nondiscrimination ordinance Tuesday at City Hall, rejecting comparisons between the nation’s historic struggle for racial equality and current efforts to safeguard rights for lesbian, gay, bisexual and transgender people. “While we love the people involved, we cannot allow their agenda to stain the fabric, the tapestry, of the civil rights movement,” said the Rev. Charles Flowers, an African-American pastor and early opponent of the measure. Jim Crow laws, lynching and slavery are not shared experiences with the LGBT community, he said, joining others in asserting that choice — not genetics — drive same-sex attraction and gender identity.

The city council meets at 6pm tonight to discuss adding sexual orientation and gender identity to the anti-discrimination code. The public will be allowed to comment and I’ll try to find a live-stream to post at the end of the day.

Previous At The Coke Protest In Times Square
Next Homocon Carl Demaio: I Was Not Jerking Off In That City Council Men’s Room