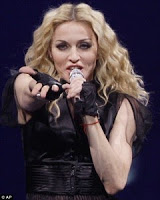 From the annual ranking just issued by Forbes:

Madonna‘s latest album, MDNA, was a flop. Her 12th studio album, Madonna sold fewer than 1 million copies of MDNA in the U.S. and the singles, like “Give Me All Your Luvin,” failed to impress on the pop music scene. But the tour that the Material Girl launched to go along with her new album was a spectacular success. Fans didn’t flock to stadium and spend upwards of $100 per ticket to hear Madonna’s latest stuff. They went to hear hits like “Vogue,” “Like a Virgin” and “Lucky Star.” The tour grossed $305 million and earned her the Top Touring Award at the Billboard Music Awards. Add to that strong merchandise sales, a clothing line, fragrance and investments in companies like Vita Coco and Madonna tops our list of the Highest Earning Celebrities. We estimate the pop star brought in $125 million between June 2012 and June 2013. That’s more money than Madonna has ever earned in the time we’ve been doing our Celebrity 100 list. The closest she came to $125 million was in 2009 when she earned $110 million. Madonna’s success, at age 55, just goes to show the incredible power of a successful music career.

Previous Booker’s Opponent: I Like Being A Guy
Next New Mexico Adds Sixth Marriage County