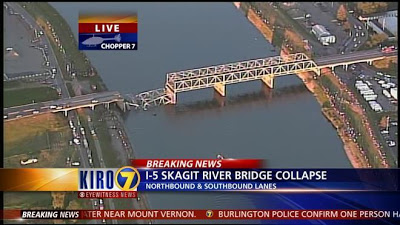 I-5 Bridge Collapses In WA

Amazingly, no one was killed.

Washington state Department of Transportation spokesman Travis Phelps told KOMO-TV that investigators are looking into the possibility that an oversize load struck the bridge and triggered the collapse. The collapse will raise questions about the nation’s infrastructure, which has been a popular issue with President Barack Obama, who earlier this year warned against “raggedy” roads and wants to focus more money on rebuilding to improve the economy.

The bridge was built in 1955 and was rated “functionally obsolete” three years ago.