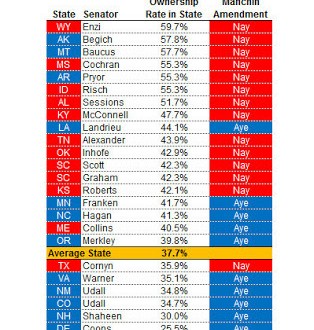 Among the 26 incumbent senators who will face elections next year (this definition excludes those senators who have announced their retirements), there was a near perfect relationship between the states’ rates of gun ownership and their votes. Among the 12 senators running for re-election in states where the gun ownership rate is below 42 percent, all but one (John Cornyn of Texas) voted for Mr. Manchin’s amendment. Among the 14 senators running where the gun ownership rate is above 42 percent, all but one (Mary Landrieu of Louisiana) failed to do so.