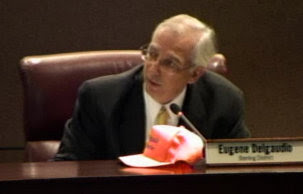 Wednesday night the Board of Supervisors for Loudoun County, Virginia voted to spend $15,000 for an internal investigation of the charges that Eugene Delgaudio used county employees to perform fundraising work for his anti-gay hate group, Public Advocate. Delgaudio, who voted in favor of the investigation, spoke to the board. Here’s a snippet of his tirade:

What an honor to be a substitute for Sarah Palin and Chick-fil-A in the media. The suicide bombers of the political left pull their own rings on their detonation devices as they advance on me, and Sterling, and all honest-to-God conservatives. Liberals blow themselves up as they approach me with their fantastic lies about what I do, and what all normal God-fearing Americans do, and I’ll explain that. The liberals destroy themselves with misrepresentations, mistruth, libel, slander, exaggeration and outright falsehoods, and victimize many innocent victims. This form of propaganda madness does no one any good. And they have failed and they will fail – four times with me. In my style, I often give you a hyperbole alert. OK, here it is, hyperbole alert: Around here in Washington, all you have to say is quote, ‘The Washington Post reports.’ Quote, unquote. The Washington Post has printed attacks on me for years; when I first came here in 1982, and probably a dozen times since I’ve been elected as supervisor. They oppose me and all Christians for taking a stand in support of the Boy Scouts traditional marriage and, yes, even eating chicken at the restaurant of your choice.

Delgaudio closed by characterizing himself as a “small David” fighting against the “foul-smelling, decaying corpse of the Washington Post.”  The video of his speech is not embeddable but you can watch it here.  (Tipped by JMG reader Blair)