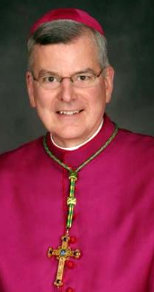 MINNESOTA: Archbishop Tells Woman To Reject Her Gay Son Or Go To Hell

Truth Wins Out reports that Minnesota Archbishop John Nienstadt responded to a parishioner’s letter by telling her that she should reject her gay son or she too will go to hell. Think Progress has the letter:

I write to inform you that the teaching of the Catholic Church on homosexuality,a s described in paragraphs 2357 and 2358 and 2359 of the Catechism of the Catholic Church is rooted in Scripture and based on the Natural Moral Law. It, therefore, shares in God’s revelation to us. Catholics are bound in conscience to believe this teaching. Those who do not cannot consider themselves to be Catholic and ought not to participate in the sacramental life of the Church. Indeed, some might find this is a hard saying by many of Jesus’ teachings were likewise received as such. I urge you to reconsider the position that you expressed in your letter. Your eternal salvation may well depend upon a conversation of heart on this topic.

Such rejection can have devastating consequences for LGBT youth: according to a 2009 study conducted by San Francisco State University researcher Caitlin Ryan and published in the Journal of the American Academy of Pediatrics, LGBT teens who experienced negative feedback from their families were 8 times more likely to have attempted suicide, 6 times more vulnerable to severe depression, and 3 times more likely to use drugs than teens who did not experience negative feedback.