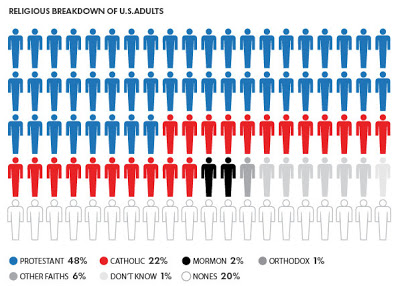 20% Of Americans Claim “No Religion”

According to Pew Research, the number of Americans who say they have “no religion” in their lives is soaring.

The Pew Forum on Religion & Public Life released an analytic study today titled, Nones on the Rise, now that one in five Americans (19.6%) claim no religious identity. This group, called “Nones,” is now the nation’s second-largest category only to Catholics, and outnumbers the top Protestant denomination, the Southern Baptists. The shift is a significant cultural, religious and even political change. Count former Southern Baptist Chris Dees, 26, in this culture shift. He grew up Baptist in the most religious state in the USA: Mississippi. By the time he went off to college for mechanical engineering, “I just couldn’t make sense of it any more,” Dees says. Now, he’s a leader of the Secular Student Alliance chapter at Mississippi State and calls himself an atheist.

The report also notes that for the first time the number of Protestants is under 50%. (Tipped by JMG reader Mark)

UPDATE: The Center For Inquiry reacts via press release.

“Though the ‘unaffiliated’ are not entirely made up of nonbelievers, the fact that one in five Americans have rejected traditional religion means that the enormous influence religion has had over policy and culture will continue to wane,” said Ronald A. Lindsay, President and CEO of the Center for Inquiry. “Furthermore, thanks to the high percentage of ‘nones’ among the younger generations, these numbers tell us that we are closer than ever to realizing a society in which religious dogma has no significant influence on public policy—that is, a society based on reason and science rather than myth and superstition.”

Previous Bay Buchanan Speaks To GOProud
Next MINNESOTA: Archbishop Tells Woman To Reject Her Gay Son Or Go To Hell